The Psychedelic Renaissance, a guide to an essential movement

The Psychonaut Guides are now available in Amazon and Apple Books.

The Essential Guide to the Psychedelic Renaissance, the first title that opens the book series, will introduce us to the exciting world of psychedelics by the hand of Antón Gómez-Escolar. This title is ideal whether you are approaching the Psychedelic Renaissance movement for the first time or you are passionate about this world, as it brings together the history, neuroscience, legality, therapeutic applications and harm reduction methods of the most promising psychedelic drugs for science. Likewise, the guide will prove useful to therapists and other mental health professionals interested in clinical applications, or for parents and educators seeking to understand the impact and safety of psychedelics and other drugs, as well as for any adult who is curious to learn about and explore this new world of the Psychedelic Renaissance.

But what is the Psychedelic Renaissance?

As can be deduced from the term “renaissance,” there was already a rise and fall of this movement as a cultural (or, rather, countercultural) current in the 1960s. However, the use of psychedelics predates the famous fad of the last century. In the words of Julian Quintero, founder of Échele Cabeza, an association dedicated to information on psychoactive substances, “the use of psychedelics in medicine comes a little from what was the westernization of traditional medicine, from the use within indigenous communities. Western medicine draws on some of these ancestral practices and the historical work of shamans to, through psychedelics, help people manage their fears and their pleasures, and use the substances to heal.” According to Sean J. Belouin and Jack E. Henningfield, substances that produce psychedelic effects such as mushrooms and cannabis, among others, have been used for millennia in various spiritual, healing, and pleasure rituals and ceremonies (Psychedelics: Where we are now, why we got here, what we must do, 2018). However, it was in 1943 with the discovery of lysergic acid diethylamide, better known as LSD, by the Swiss chemist Albert Hoffman that the advent of the history of modern science with psychedelics took place. As Antón Gómez-Escolar, author of the Essential Guide to the Psychedelic Renaissance, tells us in the article dedicated to this movement for Energy Control, the discovery of LSD by Albert Hoffmann back in 1943 was what really initiated and spurred interest and research into these substances in the West, which greatly advanced the study of the brain, as well as helping to lay the foundations of the relationship between neurochemistry and behavior and allowed the development of new experimental treatment models in mental health using psychedelics, such as psychedelic-assisted psychotherapy. With these new treatment models, people suffering from terminal cancer were able to recover their smiles in the last months of their lives, or people suffering from alcoholism were able to stop drinking. But this whole movement came to a standstill when its use “outside the clinic or the laboratory” by countercultural movements and against the Vietnam War (which made the US government and various conservative sectors very uncomfortable), some of which were greatly exaggerated by the sensationalist press, together with the lack of knowledge about their neurological functioning and long-term consequences, and various mass media campaigns, led the government of the time to ban them at the federal level in 1968 and shortly afterwards at the international level, initiating the famous “war on drugs” and putting an end to a prolific era of very promising clinical research. Years later, history would repeat itself with MDMA (“ecstasy”) with a very similar script, and would put an end to a substance of enormous clinical potential after its prohibition in 1985 despite the opposition of a large part of the scientific community and its (re)discovery and “sponsorship” by Alexander “Sasha” Shulgin & Ann Shulguin. 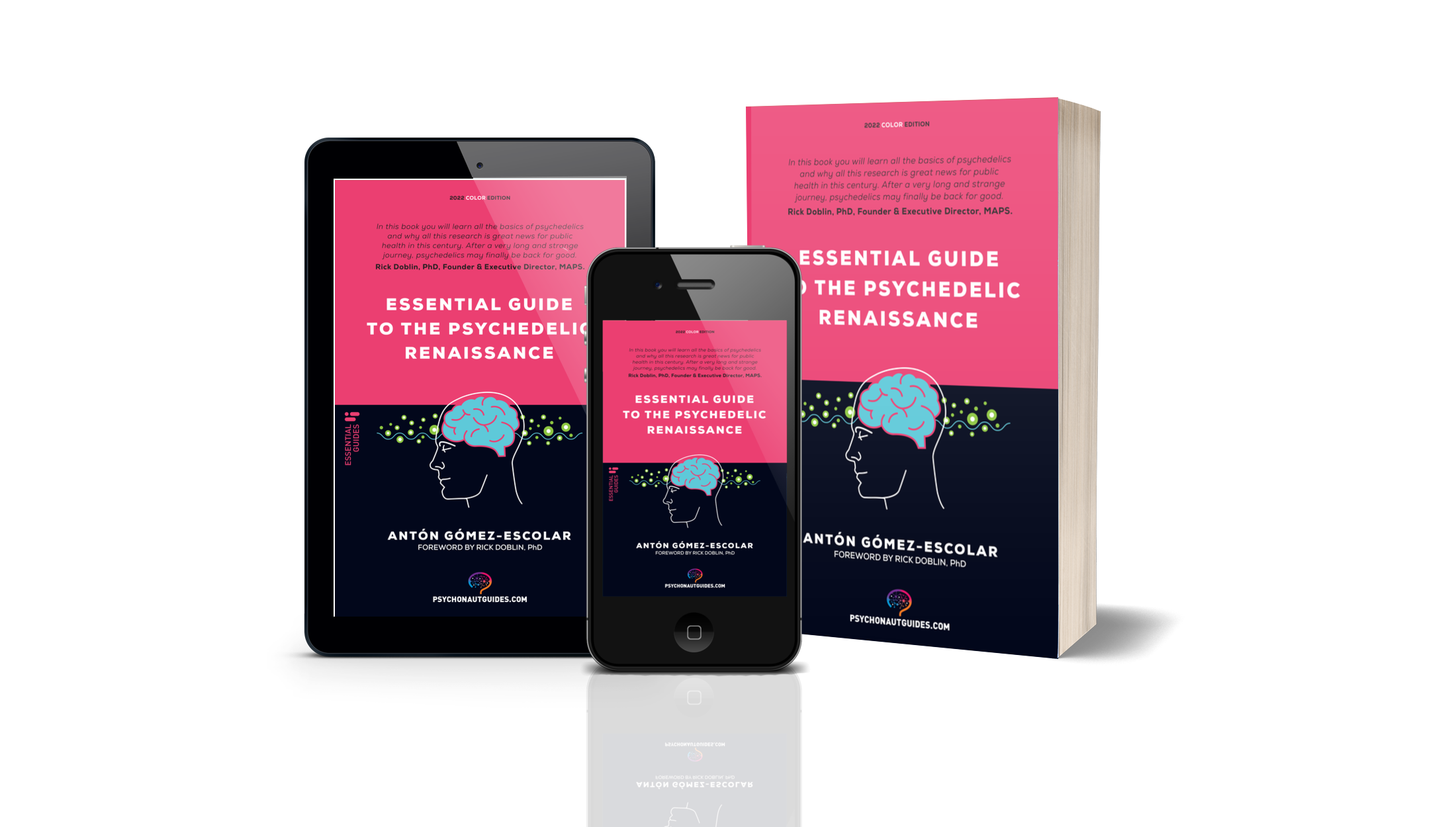 This could have been the end of this movement. However, due to a combination of technological advances, liberalization of political attitudes, and the perseverance of researchers to obtain research approval, by the early 2000s public and government perspectives on the use of psychedelics had gradually become more acceptable and positive, as Luke Williams notes in his paper Human Psychedelic Research: A Historical and Sociological Analysis.

Since then, leading scientific journals have published numerous articles showing examples of hallucinogens as treatments for many different mental disorders. For example, it reduces anxiety in terminally ill patients, improves symptoms of PTSD, and treats treatment-resistant depression, as the acclaimed best-seller in this field Michael Pollan points out.

The book, like the rest of the Psychonaut’s Guide series, is now available on Amazon in physical and eBook format, as well as Apple Books.. In addition, all titles are available in Spanish version on GuiasdelPsiconauta.com