Virtual reality (VR) is an emerging technology that is increasingly being used in a variety of fields, from entertainment to, more recently, medicine. Within the medical field, in recent years, there has been a growing interest in using VR to recreate experiences with psychedelics, with the aim of investigating their therapeutic effects and improving the understanding of how these substances affect the brain and human behavior as a substitute for the original substances.

Psychedelics, such as lysergic acid diethylamide (LSD) or psilocybin, are chemicals that alter perception, thought and mood. For decades, these substances have been used in psychological and spiritual therapies, and recently scientific studies have been conducted to investigate their therapeutic potential in the treatment of mental disorders such as depression, anxiety and post-traumatic stress disorder.

Virtual Reality and psychedelics: what we know so far 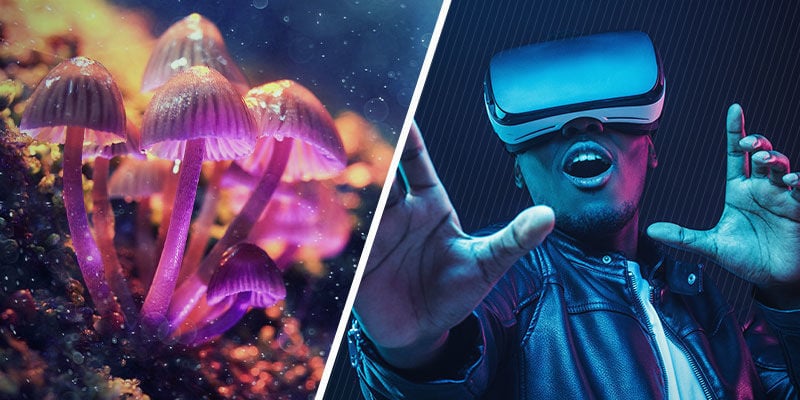 Another reason VR has been used in certain clinical trials is to recreate experiences with psychedelics because of its ability to simulate situations that might be difficult to recreate in real life. For example, VR can simulate a natural environment or a religious ceremony to help users experience the sensations associated with ingesting psychedelics and measure their results in clinical trials more immediately. Based on these data, there are indications that VR may be effective in the treatment of mental disorders. Several studies have used this technology to demonstrate whether VR can be used to treat anxiety, depression or post-traumatic stress disorder as well as regular psychedelics, despite not exerting the usual neuroplastic effect of psychedelics. Some of these studies, such as the one that gave rise to Isness-D (one of the leading VR programs emulating psychedelics), achieved a virtual reality experience that elicits in subjects a response similar to taking doses of LSD or hallucinogenic mushrooms.

Although the future of these substances as therapeutic elements is still to be demonstrated on the basis of phase III clinical trials that try to prove their unquestionable validity, VR may represent a less invasive alternative (although psychedelic substances are, except in cases of predisposition to various mental illnesses, innocuous in this respect), cheaper and which, in the general population, may provoke less rejection.

If you are interested in learning how these substances can help improve your mental health, you can read more information about psychedelics in the Essential Guide to the Psychedelic Renaissance,as well. We also recommend Psychedelics and Mental Health, by Irene de Caso and Your Brain on Psychedelics, by Genís Oña, where you will learn the keys to the effects of psychedelics, capable of producing significant changes in the processes of perception, thought and consciousness. The book also includes a prologue written by one of the greatest eminences in this field, José Carlos Bouso, scientific director of ICEERS.

These books are now available on Amazon in physical and eBook format, as well as Apple Books. In addition, all titles are available in Spanish version on GuiasdelPsiconauta.com